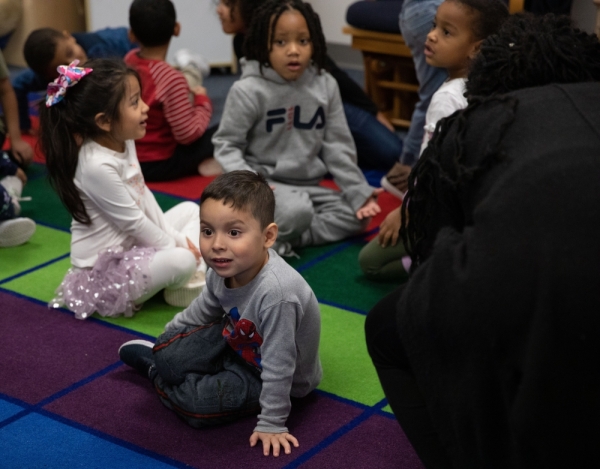 Plano ISD will be expanding its full-day pre-K program and removing the option of half-day tuition-based classes. This will allow for a more eligibility among under-served families, according to a presentation Jan. 14 at a district board meeting. (Liesbeth Powers/Community Impact Newspaper)

Pre-K classes at Plano ISD will see a shift to a full-day-only program as well as an expansion in the number of classes and host campuses in the 2020-21 school year.

Barron, Boggess, Hughston and Mathews Elementary schools will be holding pre-K classes for the first time next school year, according to a presentation by Ashley Davis, director of childhood services, at a PISD board meeting Jan. 14.

Christie Elementary will add one class to its two existing classes. The other 14 pre-K campuses will remain at the same class amount as this year.

As the program moves to full-day, Davis expects the number of families who are interested and eligible for pre-K will grow. Currently, only low-income students are qualified for full-day, she said, but those who meet any of the seven qualifiers defined by the state will be eligible.

To adjust to the expansion, the district will participate in the Federal Meal Program. With this program, breakfast and lunch would be prepared at an off-site PISD campus and delivered daily, according to the presentation.

Benefits of this program include two reimbursable meals per day and the ability to serve more students without using an outside vendor, Davis said.

Start times will be adjusted to begin at 7:55 a.m. at early childhood schools and Head Start campuses. The end time would remain at 3 p.m.

Transportation will be provided for children attending pre-K at a home campus or to and from their home campus to an early childhood school or Head Start campus if there is no home campus available, Davis said.

The district also hopes to improve enrollment procedures for the coming school year by extending the annual Pre-K Roundup event and improving the application process. These changes will make placement into classes quicker and easier, Davis said.

As part of the House Bill 3 requirements, the district held a partnership meeting with local public and private day care facilities. One facility has submitted a proposal to the district as of Jan. 14.

If a proposal were mutually beneficial, the trustees would vote on it in a later meeting.

Moving the district to full-day-only classes is part of an effort to meet House Bill 3 requirements for districts that serve pre-K through third-grade students. The law was passed on June 11 and requires that all prekindergarten classes offered to eligible 4-year-old students be full-day, according to the Texas Education Agency.

The law was effective for the 2019-20 school year, but certain guidelines and specifications were delayed until later in the year.

During the presentation, a recommendation was made for the district to submit a one-year waiver to the state to allow the district to continue serving students in half-day classes for the current school year.

Waivers are available for up to three years and must be submitted by March. The trustees will vote to approve the waiver at the February board meeting.